Cogs Agency are delighted that our friends and neighbours have recently been on the BBC talking about a project they have been doing with Google Glass. If you haven’t seen it already then do please watch the short video as we think you’ll be very impressed.

Here’s the full article taken from the BBC Technology site.

Google Glass has been hacked so that it can be controlled by brainwaves.

By combining the smart glasses with an electroencephalography (EEG) headset, the software makes it possible to take a picture without moving a muscle.

London-based start-up This Place said the tech could be utilised in high-pressure hands-free situations – such as during surgery.

It has released the MindRDR software for free in the hope that developers will adapt it for other uses.

Google made it clear that it does not support the app.

“This particular application seems to work through a separate piece of kit which you attach to Glass.

Neurosky headset
The app needs to be paired with an EEG headset to be able to control Google Glass
“We have not reviewed, nor approved, the app so it won’t be available in the Glass app store.”

The spokeswoman added: “Of course, we are always interested in hearing about new applications of Glass and we’ve already seen some great research from a variety of medical fields from surgery to Parkinson’s.”

Concentration camera
An EEG headset can be used to measure when certain parts of the brain show a greater level of activity.

In this case, the MindRDR software monitors when the wearer engages in high levels of concentration.

Within Google Glass’s “screen” – a small window that appears in the corner of the wearer’s right eye – a white horizontal line is shown.

As a user concentrates, the white line rises up the screen. Once it reaches the top, a picture is taken using Glass’s inbuilt camera.

Repeating this process will then post it to a pre-configured social media profile.

At present, Google Glass is controlled by either voice command – “OK Glass, take a picture” – or by tapping and swiping on the side of the device.

“We wanted to realise the true potential of Glass by allowing users to control it with their minds,” said Dusan Hamlin, chief executive of This Place.

“Currently, users either have to touch it or use voice commands, which are restrictive for some social situations and for users with disabilities.”

The firm’s creative director Chloe Kirton said: “While MindRDR’s current capabilities are limited to taking and sharing an image, the possibilities of Google Glass ‘telekinesis’ are vast.

“In the future, MindRDR could give those with conditions like locked-in syndrome, severe multiple sclerosis or quadriplegia the opportunity to interact with the wider world through wearable technology.”

EEG technology is a growing area.

In the past, the equipment was prohibitively expensive, but many headsets are now available for less than £100. 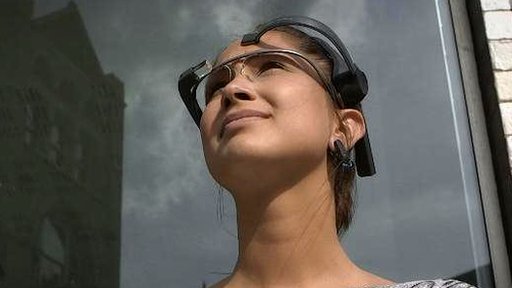 Mick Donegan is the founder of SpecialEffect, a charity which adapts games controllers so they can be used by people with limited mobility.

He told the BBC that there had been some issues with the reliability of EEG headsets in the past, but that he was excited by the possibilities of the Google Glass hack.

“It will mean someone who currently has no control at all, who can’t even control the movement of their eyes – those people will be able to use that system. For me, that’s the final frontier,” he said,

He added that developers would have to make intuitive user interfaces.

“Instead of people controlling a cursor, if you have a carefully designed interface that goes through options on a screen to choose – that’s taking the load of the user. That’s what you’re looking for.”

Other applications have included video games that attempt to monitor your emotional state, and change the game experience accordingly.

However, the technology is in its infancy – early experimental games have suffered from a lack of precision, leading to frustration among players.

Sign up in minutes with a dedicated contract accounts team to guide you.